It has been widely publicized and critically characterized as “The Sweden Experiment.” From the beginning, Sweden took a different approach to COVID-19.

It is summarized in this excerpt from a National Review article, “Has Sweden Found The Right Solution To The Coronavirus.”

“This is, in fact, the first time we have quarantined healthy people rather than quarantining the sick and vulnerable. As Fredrik Erixon, the director of the European Centre for International Political Economy in Brussels, wrote in The Spectator (U.K.) last week: “The theory of lock-down, after all, is pretty niche, deeply illiberal — and, until now, untested. It’s not Sweden that’s conducting a mass experiment. It’s everyone else.”

We’ve posed these simple questions to many highly trained infectious-disease doctors, epidemiologists, mathematical disease-modelers, and other smart, educated professionals. It turns out that, while you need proof beyond a reasonable doubt to convict a person of theft and throw them in jail, you don’t need any actual evidence (much less proof) to put millions of people into a highly invasive and burdensome lock-down with no end in sight and nothing to prevent the lock-down from being reimposed at the whim of public-health officials. Is this rational?”

In the beginning we were told (by health experts and government officials on the nightly news) that Coronavirus was seasonal like the flu, would go away in the summer, and maybe come back for a few months in the fall.

The best approach would be to shut down and isolate for a few weeks, then get back to normal and deal with Coronavirus IF it returned in the fall..

From the beginning, Sweden saw it differently. Their epidemiologists predicted Coronavirus was not seasonal, would be with us until we invented a vaccine, and this would take years.

Sweden’s prediction about the vaccine was correct. World and U.S. health experts now confirm that Coronavirus is not seasonal and will be with us until we have a widely administered vaccine (a massive undertaking).

We are now told that we should have a vaccine in 12-18 months, maybe sooner. Sweden disagrees, saying it is unlikely a vaccine can be produced and administered to a high percentage of any population in 12-18 months.

Sweden is probably right there too. The following excerpt from an article in National Geographic is consistent with other information on the subject, indicating that it is pollyannaish for us to believe that a vaccine is around the corner:

“The mumps vaccine—considered the fastest ever approved—took four years to go from collecting viral samples to licensing a drug in 1967. Clinical trials come with three phases, and the first stages of the current COVID-19 trials aren’t due for completion until this fall, spring 2021, or much later. And there are good reasons to allow time for safety checks. Some preliminary vaccines for the related coronavirus SARS, for instance, actually enhanced the disease in model experiments.

A year to 18 months would be absolutely unprecedented,” says Peter Hotez, dean at Baylor University’s National School of Tropical Medicine.

One major hitch in developing a COVID-19 vaccine is that no medically proven predecessor exists for any type of human coronavirus. This despite the fact that the 2002 SARS and 2012 MERS outbreaks, both caused by viral cousins of the new coronavirus, were warning shots that claimed about 1,600 lives.”

Sweden concluded that a more intelligent approach would be to isolate the vulnerable, devote government resources to quickly build out a medical infrastructure to treat serious cases…  and let the rest of the population develop herd immunity… essentially the same effect as a vaccine.

Based on what I’ve read, herd immunity occurs when 60%-70% of a population has been exposed to a virus and they self-develop the antibody that repels it. This creates the same result as a vaccine, only much, much faster.

As of May 7th, Sweden reported 24,623 cases and 3040 deaths in a population that exceeds 10,000,000 people. A May 4th article in the NY Times said Sweden estimates 25% of its population has already developed herd immunity to Coronavirus.

Based on graphs (below) at worldmeter.com, Sweden’s Coronavirus infection and death rates appear to have started trending down because the population is developing herd immunity.

But Sweden allowed businesses to remain open, including bars and restaurants. While its economy has been negatively affected by the elimination of  large events and a more cautious populace, it hasn’t taken nearly as bad a hit as the U.S., and it’s predicted to rebound quickly.

Will Sweden’s Coronavirus death rate spike, then recede, and then go away completely while they live and work normally, developing herd immunity?

Will the U.S. infection and death rates spike when we get back out? Logically, how can they not?

I am not saying Sweden is right.

But I am saying that America is conducting the experiment, not Sweden.

To the 33 million unemployed and millions of decimated business owners…  I hope we’re right. 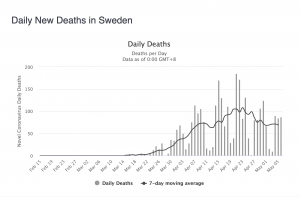 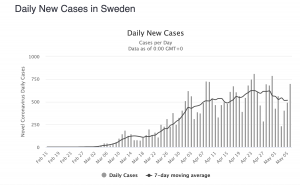 “They who can give up essential liberty to obtain a little temporary safety deserve neither liberty nor safety.”
– BENJAMIN FRANKLIN

A Tale of Two Young Men