He doesn’t have a CRM, mess with LinkedIn, Facebook, or Twitter. He won’t communicate by text or email.

Every day he puts on his jeans, pulls on his boots, and goes out in public.  He does business and makes friends the old fashioned way… in person.

He usually drives a Ford, one sitting on his lot that someone became tired of and traded in. He could afford a Rolls Royce. Heck, he could buy a Rolls dealership.

When we eat out together, it’s impossible to wrangle away the tab. But watch out at breakfast, he’ll fork a pancake right off your plate.

He never asks for anything—ever— except to be friends… and how he can help you. Unlike so many who say it, he means it. 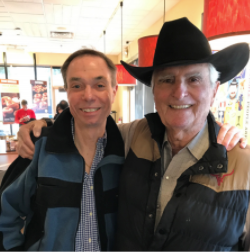 We’ve explored the U.S. and Mexico together on our motorcycles. If you’ve ever ridden, you know getting gas is more involved than with a car. You have to lean your bike next to the pump, being careful not to slip on grease or oil. Then you dismount, take off your helmet and gloves, unzip your riding pants, access your jeans pocket, dig out your wallet, and insert your credit card into the pump.

Finally, with handle in hand, you flip the pump switch, place the large nozzle into the small opening in your tank, then squeeze… and hope a sudden surge of gas doesn’t blast onto your pants. It’s a pain.

The first time we rode together he sped up as we approached a gas station. I figured he wanted to be first to gas up. Nope. He pulled up, put down his stand, got off his bike, took off his helmet and gloves, walked over to the pump, inserted his credit card, waved me up, and insisted on gassing me up.

For 25 years, riding throughout the U.S. and Mexico, I begged him to alternate. Let me gas him up, then he could do it for me. No chance. He would say things like, “Greg, I love helping you. Please let me.” How do you say no to that?

Professional recommendations are often long, effusive and formal. When I took the Arizona Bar Exam in 2009, I asked him to recommend me. The form was long, with lots of questions. In big handwritten letters he wrote, “I’d trust Greg with my wallet and my wife. Tex Earnhardt.” Nothing more. I imagine it was quite the topic of conversation at the Admittance Committee. 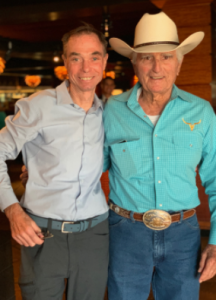 Over 25 years I’ve never seen Tex be anything but genuine, giving and nice. I believe it’s the #1 reason he built a billion dollar business from scratch, and why he has had so many people who loved and respected him.

There is a saying, “It’s better to be nice than to be right.” Tex is the most successful person I’ve ever known at being nice. With customers. With friends. With everybody.

Rest in peace my friend.

“Some People look for a beautiful place, others make a place beautiful.”
– Anonymous

Is It Really Your Life?

The smartphone app you can’t live without