Then there was Jazzercise. While it was invented in the 1960s, this new form of exercise didn’t catch on until the 80s. By 1984 Jazzercise had about 350,000 participants and 2,700 instructors nationwide.

In 1984 the first Karate Kid movie was released. This added a “karate craze” to the already booming fitness business.

Prior to the 1980s gyms were thought to be mostly for bodybuilders. But after a stream of Arnold Schwarzenegger movies (Conan, Terminator, Predator) hit the box office, health clubs became the go to for everybody.

That was a history lesson. Now for the business lesson…

Can you name the largest sports equipment company in the world? Nike, of course.

But Nike wasn’t always Nike. It was founded as Blue Ribbon Sports in 1964 by famed track and field coach Bill Bowerman and middle distance runner Phil Knight. (Knight was known for running a 4 min 13 sec mile while attending the University of Oregon.)

In 1971 Blue Ribbon Sports was renamed Nike in honor of the Greek goddess of victory. At that time Nike catered exclusively to runners.

Then in the 1980s Bowerman and Knight faced a challenge. Their main competitor, Reebok, had greater market share and was gobbling up more.

They recognized that the major fitness trends of the 80s were a result of more than a society deciding to be healthy. Those trends, and the commercial successes that resulted, were a product of “stickiness.”

Stickiness is how well something resonates with consumers. Is it memorable? Is it fashionable? Is it cool? Is it me?

The company decided to develop a new marketing campaign that was “universal and intensely personal.” Nike was determined to identify with everyone, or better said… have everyone identify with Nike.

In 1988 Nike launched the “Just Do It” campaign, which spoke to all Americans regardless of gender, age, or fitness level. The first commercial featured an 80-year-old runner, Walt Stack. 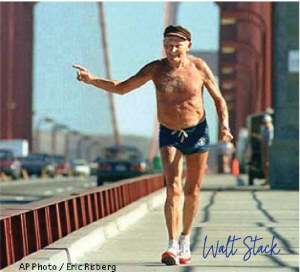 The TV spot shows the elderly Stack running across the Golden Gate Bridge while saying to viewers, “I run 17 miles every morning. People ask me how I keep my teeth from chattering in the wintertime. I leave ‘em in my locker.” The commercial then turns silent and black as “Just Do It” appears in white on a black screen.

Before Nike launched the campaign in 1988 its revenue was $800 million. By 1998 the company’s revenue exceeded $9.2 billion. It was largely the result of those three sticky words.

We can all relate to “Just Do It” in one way or another.

Want to power up your personal or business brand? It takes more than quality, service, and marketing. You need to get sticky. So…

How It Was Given

THERE IS NO SUBSTITUTE

Changes From COVID That Won’t Go Away