It predates 5500 years of written history.

Some scholars say it originated as an act of peaceful intent because it shows that a hand holds no weapon.

Others suggest it represented the sealing of a bond, symbolic of the mutual commitment to a promise or oath.

In ancient Greek it was called a “dexiosis,” meaning “to give someone the right hand.”

Back then, the gesture was regarded as sacred. Rulers at that time commissioned paintings of themselves shaking the hands of gods.

Possibly the earliest known depiction of the practice is from the 9th century BC. It’s a wall-mounted sculpture (relief) of the Assyrian and Babylonian kings shaking hands to consecrate an alliance… 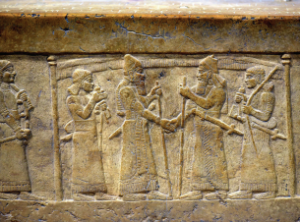 Therefore, we know the handshake is at least 10,000 years old…but scholars say probably more. In fact, probably A LOT more.

“Anatomically modern humans” have been traced back to origins in Africa about 300,000 years ago, and around 60,000 years ago humans spread quickly into other frost free zones of Asia and Europe.

But while the birth of the handshake can be debated, one thing cannot…it’s the ubiquitous global symbol for peace, friendship, trust, and goodwill. It’s the definitive custom we use to meet, congratulate, or thank another person.

So in honor of arguably our oldest human custom, here is my ode to the handshake…

In a 1977 publicity stunt, New Jersey Mayor Joseph Lazarow shook more than 11,000 hands in a single day. This broke the previous American record held by Theodore Roosevelt, who shook 8510 hands at the White House in 1907.

However, according to the Guinness Book of World Records 1964 publication, English politician Lance Dowson shook 12,500 hands in 1963. Since then his record has been beaten multiple times, but the category has been retired from the Guinness Book.

If you are in Switzerland and you meet a couple, be sure to shake the woman’s hand before the man’s. It’s expected there. But if you’re in Russia, it’s customary to not shake women’s hands at all. The same is true in many conservative Muslim societies.

In Asian countries like China, Japan, and Korea, it’s expected to shake older people’s hands first. A weak handshake is preferred and is usually accompanied by placing the left hand on the right forearm of the other person. Keeping your left hand in your pocket while shaking hands is considered disrespectful.

The “hand hug” is popular with politicians, who will place the left hand on the back of the right hand of the receiver, creating a cocoon-like feeling.

Boy Scouts use a left-handed shake to symbolize trust.

The “snap handshake” is popular in Liberia and a few other places around the world. This handshake concludes with both people snapping their fingers against each other.

I’ve heard that back during the days of the Wild West, Texas was well known for being the state where people actually got killed because they backed out of handshake deals. Maybe that’s why former Texas Governor Rick Perry said…

“When I make a vow to God, it’s even stronger than a handshake in Texas.”