“No one ever made a difference by being like everyone else.“
– P.T. Barnum

Do you occasionally run across people who seem a bit odd or unusual? It just happened to me. Actually, it was me.

Last week Teresa and I had dinner with a friend of hers. The next day the friend called Teresa, and asked, “Why do you let Greg do that?” “Do what?” Teresa replied. “Bring flax packets to a restaurant and sprinkle it all over his food in public. Isn’t that embarrassing?” 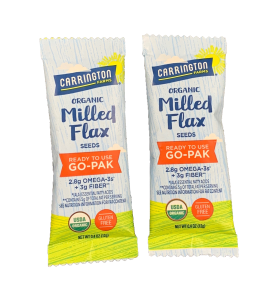 What the friend didn’t see was that along with my flax packets I also had a baggie filled with whole wheat pretzel sticks and Trader Joes’ Crunchy Curl lentil chips. I take those with me to every meal out. Not kidding. Have for years. They taste better than bread. Healthier too.

Growing up I cared a lot about what people thought of me. I still do, but not in the same way. I want to be respected  for working hard, caring about others, and being a good person. But I don’t mind if people think I’m an odd duck. Actually, I’ve come to think it’s kind of fun.

That flax packet incident with Teresa’s friend got me thinking about odd duck people. So I Googled it. Check this out…

“We are all just a bunch of freaks. Some are just more honest about it.”

VOLTAIRE, famous writer and philosopher, drank up to 50 cups of coffee a day. He lived for caffeine, rarely eating normal meals, snacking as he drank coffee all day. (If Voltaire lived today he could healthy-up his coffee with my flax packets.)

BEN FRANKLIN, author, politician, inventor and scientist, took what he called “cold air baths.”  Every morning, he got naked for two hours with the windows wide open. Franklin believed this practice would keep him disease free because it would cleanse his body.

THOMAS EDISON, inventor and entrepreneur, would only hire people who didn’t salt their soup prior to tasting it. His reasoning was that he only wanted to be surrounded by people who tested their presumptions before acting on them.

BILL GATES, inventor and entrepreneur, would rock back and forth as a coping mechanism for moments of intensity when he needed to disconnect and focus. When friends and associates observed him go into rocking mode, they knew they better stay quiet.

Ford believed that nature gives us everything we need to survive, especially when it’s growing wild and untouched, not planted or cultivated by human hands. When he entertained at his home, Ford often served wild weed edibles.

In his bio of Ford, Sidney Olson wrote that Ford once said, “There is nothing quite like a dish of stewed burdock, followed by a sandwich with soybean bread filled with milkweeds to set up a man for an afternoon’s work.”

Did Ford’s odd duck diet work for him? Olson observed, “Ford outlived his “meat and potato” friends and enjoyed dancing late at night into his 80s.” Ford died in 1947 at 83 years old. When he was born in 1863, his predicted life span was only 39 years.

Imagine if Ford used my flax packets? He might still be living today!

So the next time you see someone behaving oddly, ask yourself this: “Why aren’t I? Should I order flax packets?”

Carvana… Will The Big Guys Wake Up?