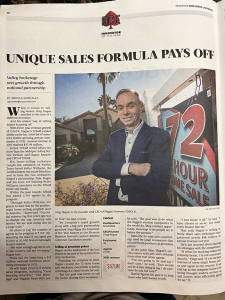 I am a fan of Shark Tank, and particularly the outspoken, maverick entrepreneur and billionaire, Mark Cuban.

He went from zero net worth to the Forbes list of The World’s Billionaires when he sold his second company in 1998.

In his book, How to Win at the Sport of Business, Cuban talks about his path to success. It was not an easy road.

Three years after graduating from college, he was living hand-to-mouth, going nowhere. So, he decided to start over. He packed up what little he had and moved to Dallas.

Cuban rented a cheap apartment with a bunch of unruly roommates, often having to sleep on a smelly couch or the filthy floor. He had no money, no connections and no job.

Finally, he found work at a computer software store. Just one problem… he didn’t know a thing about computers or software. But within a few months he was selling more software than any other employee. He was also getting paid big bucks to provide expert advice to customers.

What did Cuban do better than the store’s other employees?

He memorized the manuals.

A quote from Cuban’s book: “Every night I would take home a different software manual and read it.”

In an interview, Cuban explained that his initial path to success came from his commitment to learn more about that business than anyone else (even the owner of the company).

Cuban knew that lots of people work hard, but not always smart. So he committed himself to being smarter than anyone else in that area.

My dad, Chubby, gave me similar advice. When I was a kid he would often tell me, “Learn something about everything and everything about something”… a quote by 19th century anthropologist, Thomas Huxley.

Chubby said “Something about everything” was to help me understand the world better and relate to a wide array of people.

“Everything about something” was to emphasize the importance of knowing my profession better than anyone else. This was the “magic” that contributed most to Cuban’s success. It’s also what I’ve strived to do in real estate.

Without trying to sound boastful, I really have taken the time to learn the business of real estate inside and out, from the legal (I am an attorney) to the marketing (I founded a real estate specific ad agency), and everything else in between.

Every day I devote myself to trying to be the most knowledgeable person in my profession. Whether I am or not is not the point. It’s the dedication to try to know everything about that one area that I believe has made a huge difference in my success, just as it did for Mark Cuban.

72SOLD’s ability to revolutionize (and dramatically improve) the process for selling a home wouldn’t have happened if I had not dedicated myself to becoming an expert in my profession. You can’t innovate what you don’t fully understand. Cuban has stated this business truth many times.

It’s interesting that the term “know-it-all” has somewhat of a negative connotation in our society. Maybe it’s jealousy of those who don’t “know everything about something”… but wish they did.

There are advantages to having a wide breadth of knowledge…learning something about everything.

But personally, I believe that learning everything about something is the key if you want to innovate.