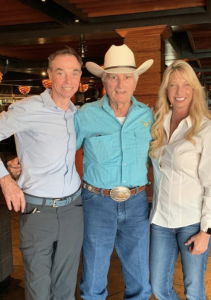 But when I rode with Tex Earnhardt, I enjoyed the luxury of a “gas valet,” someone who pumped the gas for me when I pulled up to the pump. You’re probably thinking Tex was so wealthy that I benefited from his valet.

The funny thing is…Tex didn’t actually have a gas valet, he WAS the valet.

For years we rode together throughout North America. When we stopped for gas he would wave me over to one of the pumps like he was my personal pit crew. He insisted on pumping it, paying for it, then patting me on the back like I had done something for him.

“It’s not true that nice guys finish last. Nice guys are winners before the game even starts.” -Addison Walker

Back in December 2018, shortly after Tex’s 88th birthday, I wrote a newspaper article about him titled The Nicest Guy In The World. I wanted people to get my perspective on a man I had looked up to as my #1 mentor and trusted friend for 25 years.

After opening a small Ford dealership with just 3 cars in 1951, Tex built it into one of the largest auto dealerships in America, now with 17 brands and 19 locations. While Tex knew the car business, he also knew something even more important… people. I believe Tex’s genuine and obvious concern for his customers was the power that propelled his success.

There is a saying, “It’s better to be nice than to be right.” Tex was the best in the world at being nice. With customers. With friends. With everybody. He always put nice before right.

Tex built a financial empire that enabled him to afford about anything, but he wasn’t driven by money. Tex was about making friends, not buying things.

Eating with Tex was a kick! At breakfast he’d steal pancakes right off your plate, but then insist on paying your tab. At restaurants he’d walk around introducing himself to diners. His warm and magnetic personality made people instantly comfortable talking with a stranger. Tex could make friends in minutes.

His iconic TV commercials made him a celebrity in Arizona, but he didn’t let it go to his head. He once told me that what made him feel important was making others feel important…and he meant it.

When I took the Arizona Bar Exam I submitted his name as one of my recommendations. They sent him a multi-page form with an array of questions about my character and trustworthiness. The Bar Committee expected him to write a paragraph or two in answer to each question. He wrote across the front page: “I’d trust Greg with my wife and my wallet” and sent it in. I was later told it was the best recommendation ever!

Charles Darwin said, “A man’s friendships are one of the best measures of his worth.”

Ask Tex about his net worth and he’d say it was the number of friends in his net.

He was a man of simplicity. He was a man of generosity. But most of all, he was a man of friendship. One day we talked about life and legacy. As usual, his words were short and sage: “How much can you do for how many?”

Tex passed away in April of 2020. Every year around his birthday on December 9th, I am inspired to write an article honoring his influence on my life and so many others. Like my dad, Chubby, I don’t want Tex to be forgotten. His approach to life should be an inspiration to all of us.

Helen Keller said: “Walking with a friend in the dark is better than walking alone in the light.”

How right she was! I’d rather ride with Tex in the dark than ride alone in the light.

Tex, you left a legacy in my heart, and in the hearts of many. The world was, and still is, a better place because of you. Wealth may be defined by money, but worth is defined by friendships. You were a man of wealth, and a man of worth, and “That ain’t no bull.”

I miss you my friend.

I Lucked into Being American

The Secret to a Richer Life

Learn Twice as Much in Half the Time